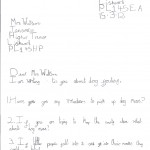 I have received letters from Joe Moynan,Jack Dodd and Travis Mason at St Cleer School telling me about the problems caused by dog fouling. I have scanned in one of the letters.

I replied as follows

Thank you for your letter regarding the problems caused by dog fouling.

I agree that this is a real problem, not just in St Cleer but across Cornwall.

It is such a pity that a few irresponsible and selfish dog owners do not clean up after their animals and cause possible health problems to other people.

There is only one dog warden to cover over half of Cornwall so it is difficult to catch and prosecute those who commit this offence, and unfortunately it is not a
problem which can be tackled by volunteers due to health and safety issues.

I will write a piece about this on my website and perhaps you could write something for your school newsletter. That way we may be able to make people more aware of their actions

I will take your letter to the next meeting of the Parish Council so that they are also informed about your concerns.